“I came not to bring peace to the earth, but rather division,” Jesus tells his disciples. “Mother against daughter and father against son.”

These words have been used to isolate and distance.

“A household will be divided,” hisses one party, ending the conversation — and, at times, the relationship.

My struggle, I guess, isn’t with Jesus’s words so much as it is with the way the rest of us interpret and apply those words.

Because I don’t think that Jesus meant his words to tell us what we’re supposed to do in response to the signs of the times.

It is Jesus, by his very presence, who is divisive.

Angels announced his birth with the song “peace to God’s people on Earth” and the promise that he would guide our feet in the way in peace.

Jesus disrupted the Peace of Rome, bringing the Peace of God, which is much more than an absence of war. The peace Christ brings is the active presence of God with Us.

Division, then, is not the primary goal of Jesus’s behavior. His words here are perhaps best read as an honest description of what will naturally occur as he continues his work of bringing about the Kingdom of God.

Peace and division are both the work of Jesus, not a command to his followers. We don’t need to have divided homes in order to love God. We are not called to judge our families or vehemently defend our beliefs and views.

Jesus is the one who brings the fire, not us.

That said, Jesus’s work of peace and division will certainly have implications for his followers.

Just as living under the Roman Empire came with a certain way of doing things — roads built and traveled a certain way, a rhythm of life and taxes, a pattern of social etiquette and customs — we, too, have a certain way of producing and acquiring items, a certain rhythm of life and taxes, a set pattern of traditions and customs. Some of these are huge systems: our voting schedule, the way we invest money, the way we celebrate Christmas. Others are small: that we have eggs for breakfast, that we walk on the right.

But Jesus tells us that just because our world has a certain order to it, does not mean that the order is God’s.

And as we follow Jesus in his bringing of the Kingdom, the order of our world may be disrupted.

Which part of us loves.

I think our desire to see our world disrupted is why we love the flash mob phenomenon of the last decade so much.

The world has a certain way of doing things, a certain rhythm, a certain pattern. And flash mobs — they know that we have certain expectations for what happens in public places. There are ways the world works. Flash mobs play with our expectations.

My favorite are the flash mobs at malls right before Christmas, bursting into Handel’s Hallelujah Chorus. I love the disruption of normalcy, the call to beauty and joy and the holy right in the midst of an everyday place, the call to HALLELUJAH in the midst of our errands.

During the Chorus, there are always a few grumpy people.

And I love them, because they’re just like me. They’ve got their list, they’ve got errands, they’re not about to stop their very productive shopping trip. In the videos, you see them in the background, nudging the makeup artist to continue her work or hurriedly checking out so they can go on about their day.

They are so caught up in what they have to do — so caught up in the workings of the world — that they cannot stop to notice the holy. They cannot hear the call to a holy moment even as they shout over the HALLELUJAHs ringing in their ears.

And it’s disruptive, it’s disrupting what they’re doing, disrupting their entire day. The mall is for certain activities, for commerce, and everyone was doing that, and now there are two things going on: the normal commerce of the world and the outbursting chorus of Hallelujah.

I especially love the Hallelujah Chorus flash mobs most because people join in.

It’s such a well-known piece. You can see, in the videos, people caught off guard, then finding the rhythm, remembering the words and their part, and, with increasing confidence, joining in. They sometimes stumble, they sometimes miss a queue our fall out of step with the timing — but they’re in it.

In a span of seconds, they hear the call to live in a way that is different from the way of the world, stop to pay attention, and then become active participants in this new reality.

And I think that’s exactly what the choristers hope for: that everyone join them, that everyone recognize this is a good and worthwhile activity — at least for the next five minutes.

The choir isn’t there setting out to be divisive. But not everyone is able to hear their action as an invitation. Some stick to the status quo, stick to the way things are — and so there’s division.

Division is not the goal, but occurs as a natural outcome of pursuing the holy.

I think that’s what Jesus is on about.

We’re invited to follow him into a Kingdom way of life, a way that loves of God and neighbor — and that living be divisive as a natural outcome.

There was a group of Christians who took seriously God’s command to care for the planet.

The neighbors were furious. These Christians were ruining their neighborhood. They told them to stop; they wouldn’t.

Eventually, the neighbors found a way to get these Christians to stop digging through their garbage: They started recycling.

At St Luke’s Episcopal Church in Ballard, where I serve, there’s group of Christians who took seriously God’s command to feed the hungry and care for the poor. 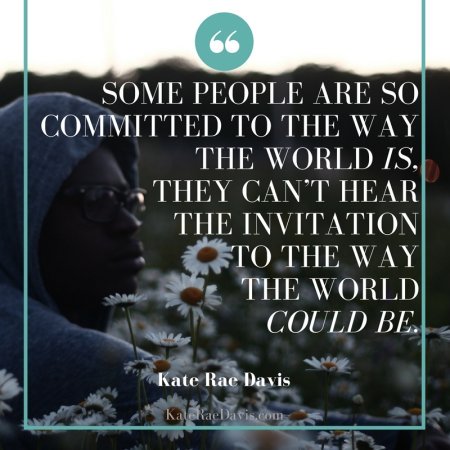 And so they did, and they do. They cook meals that they serve for free, five days a week, for any and all who care to come.

The neighbors don’t understand; some of them are quite angry. These Christians are ruining the neighborhood.

Jesus’s experience of division might bring us some consolation. The pursuit of the Peace of God is rarely without division.

Jesus invites us to read our times.

To read the movements and rhythms of our culture, our city, and our homes. He invites us to consider: What would it look like to love God and neighbor in this place? How might I pursue the Kingdom in this moment?

And, yes, he warns us that when he shows up it will bring division, disunity — not the division of warfare or indifference, but a division rooted in the singing of the holy in a song that some just won’t be able to hear.

Do you hear the holy song?

Do you hear the Hallelujahs?

Will you join in singing?

Where do you see glimpses of the kingdom in your own life?

Where do you see the kingdom show up in your neighborhood?

What might you do to “join in the singing”? How could you love God and neighbor?

What fears hold you back from joining?