The Image of God

The theology of the imago Dei, or image of God, holds that humans, being created by the divine, hold the image of their Creator within themselves.

In A Tree Grows in Brooklyn, Betty Smith quietly addresses the debates around imago Dei through her protagonist, Francie. After detailing the background and character of the Rommelys (Francie’s maternal family) and the Nolans (her paternal family), the section concludes with these paragraphs:

“And the child, Francie Nolan, was of all the Rommelys and all the Nolans. She had the violent weaknesses and passion for beauty of the shanty Nolans. She was a mosaic of her grandmother Rommely’s mysticism, her tale-telling, her great belief in everything and her compassion for the weak ones. She had a lot of her grandfather Rommely’s cruel will. She had some of her Aunt Evy’s talent for mimicking, some of Ruthie Nolan’s possessiveness. She had Aunt Sissy’s love for life and her love for children. She had Johnny’s sentimentality without his good looks. She had all of Katie’s soft ways and only half of the invisible steel of Katie. She was made up of all of these good and these bad things.

She was made up of more, too. She was the books she read in the library. She was the flower in the brown bowl. Part of her life was made from the tree growing rankly in the yard. She was the bitter quarrels she had with her brother whom she loved dearly. She was Katie’s secret, despairing weeping. She was the shame of her father staggering home drunk.

She was all of these things and of something more that did not come from the Rommelys nor the Nolans, the reading, the observing, the living from day to day. It was something that had been born into her and her only–the something different from anyone else in the two families. It was what God or whatever is His equivalent puts into each soul that is given life–the one different thing such as that which makes no two fingerprints on the face of the earth alike.” (p72-73)

Smith’s narrator asserts that there is a unique image that each person holds; each “something” is a gift of God.

One thing I love about this passage is that it doesn’t deny the “bad things” and the ways cruelty, brokenness, despair, and shame are handed down from generation to generation.

What I love even more is the way that this passage assumes God’s presence in a person. Smith nullifies the question of whether a person must be in relationship with God in order to carry the image of God.

Before birth or at birth, God put the “something” into Francie, so Francie is always already in relationship with God. She is in relationship as the receiver of this gift, as a bearer of the image. Even when she disavows God, she is still embodying that “something different,” still holding the lovingly wrapped package that God gave uniquely to her.

Respond in the comments! 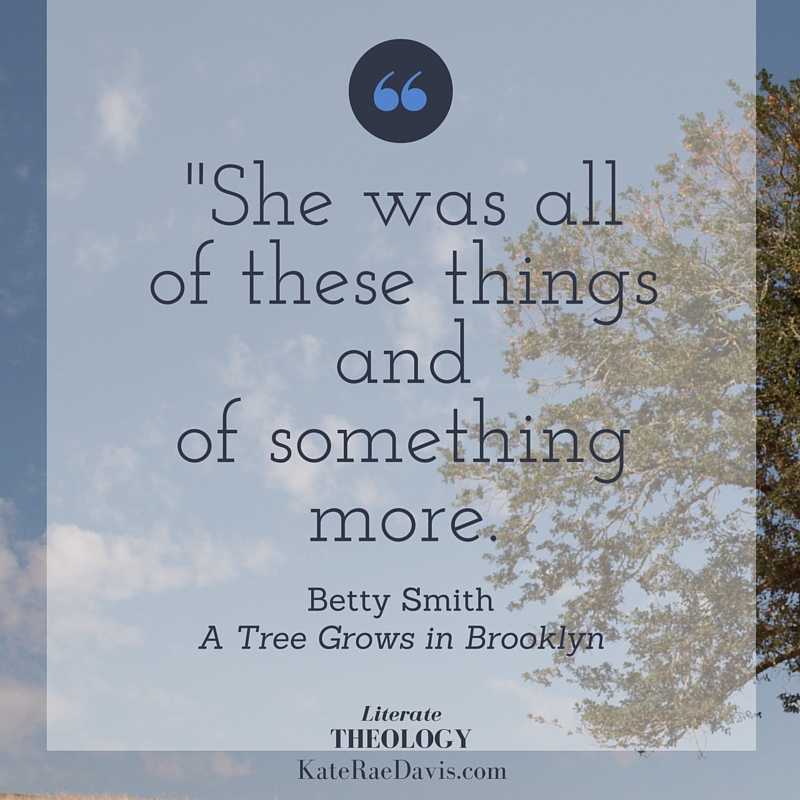