Today, I’d like to add to the definition of “Christian values” Voters. Yes, this is religion and politics — our culture’s sacred taboos in polite conversation — brought together.

The Meaning of Wealth

First, some words from G.K. Chesterton on a Christian understanding of the trustworthiness of the rich. The presidential candidates’ net worth differs depending on who you ask, as does the meaning of their worth. Most often, I seem to hear candidates’ wealth discussed as a sign of respectability, responsibility, and trustworthiness. Our culture equates the accumulation of wealth with responsible citizenry, achievement, and moral goodness. For the record, both parties have candidates with considerable wealth. On the Dem side: Clinton is worth something between $15-45 million; Sanders around half a million. On the Rep side: the estimated worth of Drumpf is over $4,000 million (I find it helpful to remember that a billion is a thousand million); Bush around $22 million; Carson somewhere between $10-26 million; Kasich around $10 million; Cruz around $3 million; Rubio something under half a million.

Only the Christian Church can offer any rational objection to a complete confidence in the rich. For she has maintained from the beginning that the danger was not in man’s environment, but in man. […] If we assume the words of Christ [on the impossibility of a camel going through the eye of a needle] to have meant the very least that they could mean, His words must at he very least mean this–that rich men are not very likely to be morally trustworthy. Christianity even when watered down is hot enough to boil all modern society to rags. The mere minimum of the Church would be a deadly ultimatum to the world. For the whole modern world is absolutely based on the assumption, not that the rich are necessary (which is tenable), but that the rich are trustworthy, which (for a Christian) is not tenable. You will hear everlastingly, in all discussions about newspapers, companies, aristocracies, or party politics, this argument that the rich man cannot be bribed. The fact is, of course, that the rich man is bribed; he has been bribed already. That is why he is a rich man. The whole case of Christianity is that a man who is dependent upon the luxuries of this life is a corrupt man, spiritually corrupt, politically corrupt, financially corrupt. There is one thing that Christ and all the Christian saints have said with a sort of savage monotony. They have said simply that to be rich is to be in peculiar danger of moral wreck. It is not demonstrably un-Christian to kill the rich as violators of definable justice. It is not demonstrably un-Christian to crown the rich as convenient rulers of society. It is not certainly un-Christian to rebel against the rich or to submit to the rich. But it is quite certainly un-Christian to trust the rich, to regard the rich as more morally safe than the poor. [,,,] In the best Utopia, I must be prepared for the moral fall of any man in any position at any moment; especially for my fall from my position at this moment.

Everyone is, to some degree, inclined to immorality, even if they have millions in the bank. Chesterton’s point is that we are all human, and any of us may morally fail and fall.

So then a better question than “how much wealth do candidates have?” is often suggested to be “how much do candidates donate?” But I’d propose an even more relevant question as: “What do candidates spend their wealth on: personally, professionally, and through donations?” Spending a small fortune on a private jet is not the same as spending a small fortune on a child’s college education. And I’m less impressed with someone’s million dollar donation if it went to renovating an opera house when there are people starving in our own country. 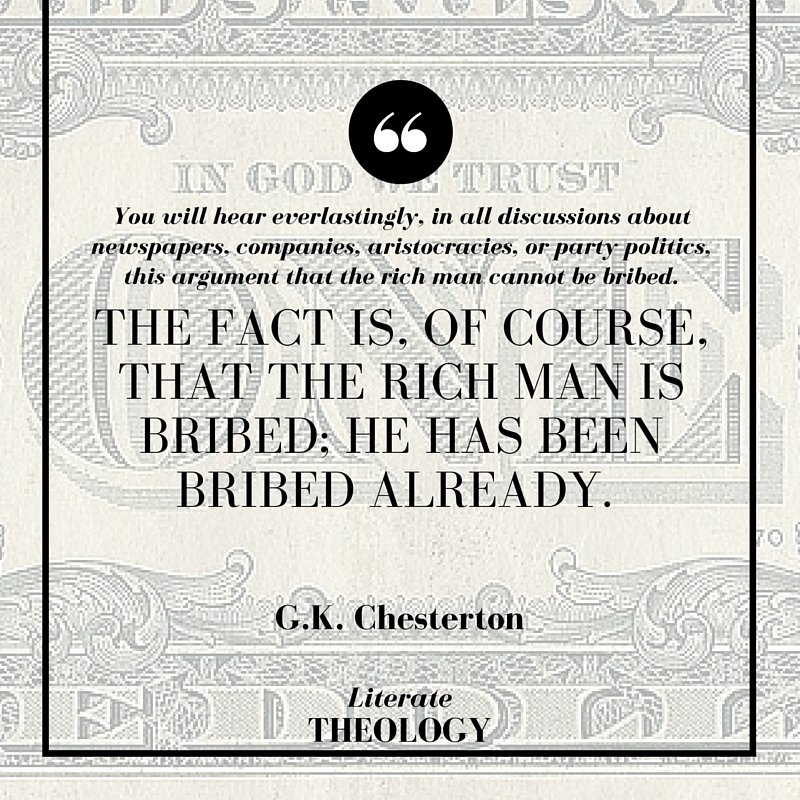 Below is a portion from Shane Hipps’s Selling Water By the River on love (which I think all Christians can agree is pretty highly ranked as a Christian value) and fear. I won’t add to the plethora of opinion pieces on the use of fear in this presidential debate, or the ways a certain candidate (ahem) is exploiting fear responses for votes.

Darkness and light do not exist together. They have never met.

Darkness is always at the mercy of light. If you want to be rid of darkness, light a lamp.

In 1 John 4:18, he writes, ‘There is no fear in love. But perfect love drives out fear. What John writes here is deeply insightful for two reasons. First, he does not use the expected dualism between love and hate; instead he sets fear at odds with Love. This is truly revealing, as it shows us that behind all hate is really a deeper problem of fear.

Second, we are shown that the relationship between love and fear is the same as that of light and darkness. Love and fear cannot occupy the same space. Moreover, Love and fear are not equal and opposite forces. Fear is always at the mercy of Love. One way to see it is that fear is actually the absence of Love, not the opposite. The lesson here is an important one. Love has no opposite. No force in the universe rivals it.

A candidate’s courage/bravado is artificial if the candidate is the one instilling the fear in the populace. It’s easy to fight an enemy when you know the enemy is a phantom you have created. Perhaps we should collectively take a few deep breaths to evaluate the legitimacy and source of a fear. Perhaps we should quiet the surging adrenaline we all experience in shouting matches, in order to listen for gentler whispers of love. 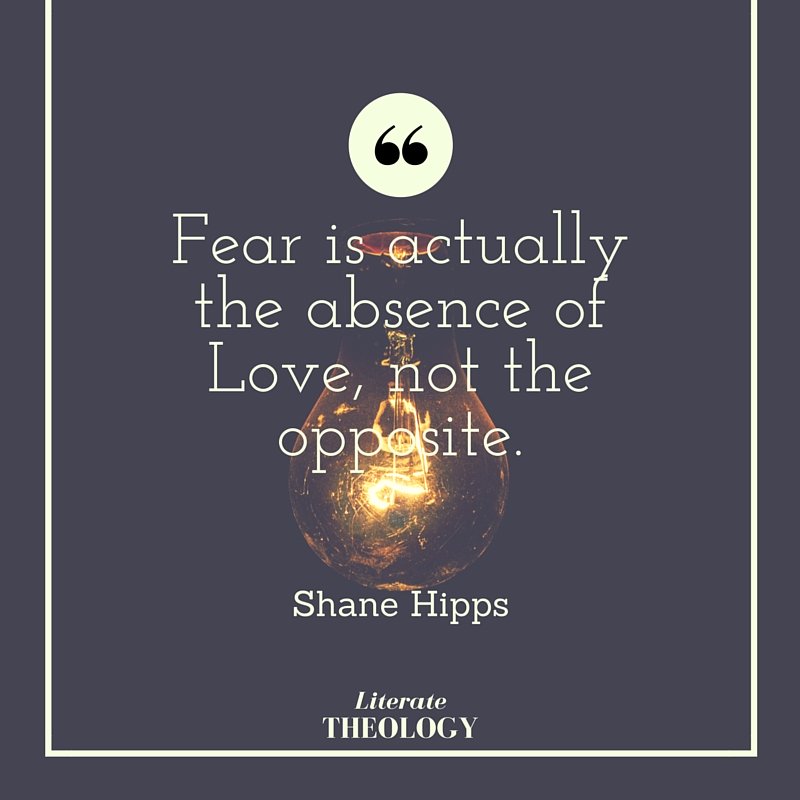 These certainly aren’t the only criteria that Christians will — or should — use when completing their ballots. But we should certainly evaluate the culture’s equation of wealth with respectability. And the capacity for Love is certainly worthy of our attention and consideration. When we claim to vote with Christian values, we shouldn’t mean that we’re looking at candidates stances on one or two select issues (however important those two are, they are only two in a much wider, global picture). We should examine the wide array of Christian values that frame an entire person and their way of being in the world. And I do mean the world: it’s too easy to forget that the majority of the President’s job description is about foreign affairs, not domestic issues.