This post is part of a series on the theology of Mad Max: Fury Road. Find the rest of the series here.

Mad Max: Fury Road offers a post-apocalyptic image of the future in order to push audiences to ask questions about our present. The film seems to center around hope and its role in these character’s lives. The various factions offer a couple different ways of understanding hope, highlighting the problems of each, before providing an ultimate resolution through offering a framework for a healthy way to hope.

Eschatology is the aspect of theology that concerns the “four last things:” death, judgment, heaven, and hell. The eschaton is shorthand for the place where we hope all this — all our prayers, policies, and parenting  — the place that we hope everything is headed.

The tunnel metaphor is an enclosed line, and the confines of the tunnel mean that it’s impossible to get off track. As long as we keep moving, we’ll end up at the destination. There are only two options: (1) going back to where we first came from; in scriptural language we’d say “back to Eden,” to the garden in Genesis 2, or (2) going forward to the light at the other end of the tunnel; we might say heaven or the city described in the Book of Revelations.

What’s problematic is that the tunnel metaphor allows us to believe that absolutely anything that happens — fossil fuel consumption, nuclear weaponry, murder — is all part of a linear history that God has laid down. It’s all part of the tunnel line that will eventually bring us to the light.

The metaphor offered in Mad Max: Fury Road for the eschaton is the Green Place, and they get there by “a long night’s run, headed east.” The image retains the darkness/light metaphor of the tunnel (the Green Place will be on the other side of darkness; it is associated with the coming light of dawn), and adds greenness — the color associated with vibrant life, from vegetation.

This driving metaphor solves the issue of the linear history of the tunnel metaphor. On the drive, it’s possible to get off track — they could begin to head too far north or south and miss the Green Place. They could find themselves going the wrong direction entirely, a direction that’s neither “back to Eden” nor “ahead to the City.” The driving metaphor preserves potential for missing the mark, the potential of human error.

Where is Hope Located?

The film asks us to consider where we place our hope by juxtaposing two eschatons, two places that hope can reside.

The first form of hope we see epitomized in the War Boys, especially Nux. For the first portion of the movie, Nux represents disembodied hope, meaning that arriving at this eschaton requires the loss of one’s body. The eschaton, called Valhalla (sometimes written Walhalla), is reached only through death. Early in the film, we see Nux screaming “I live. I die. I live again!” Death is the gateway to the paradisiacal afterlife.

In this theology, the individual’s arrival will be more honorable if the death happens in combat that furthers the cause of the empire. Immortan Joe tells the war boy Nux, “Return my treasures to me and I myself will carry you to the gates of Valhalla.” He anoints Nux with chrome spray and the blessing that he will “ride eternal, shiny, and chrome.”

I’ve read some commentators who were quick to interpret Nux’s disembodied hope as a parallel for Islamic extremists. Which, sure, and those similarities don’t need yet another summary. What I haven’t read much of is the parallel that Nux also represents the disembodied hope found in many religions, including some forms of Christianity.

The belief that death is more honorable if done to further the religious cause is as much a Christian belief as an Islamic one. Many early Christians died to uphold the Christian cause; we refer to them as the martyrs. And when we tell the story of martyrs, we witness to the importance of their lives and deaths.

Both religions (the Cult of the V8 and some forms of Christianity) are headed by men believed to be immortal (Immortan Joe; Jesus) who will deliver their followers to a paradisiacal afterlife (Valhalla; Heaven). Death for the sake of the leader’s teachings will lead to glory and honor after death — it is this glorious death that Nux desperately seeks.

So what’s the alternative to hoping for life after death?

The Green Place — spoilers abound from here on

We see the alternative to the War Boys’ disembodied hope in the located hope of the protagonists, and especially of the escaped breeders/wives. The wives’ eschaton is the Green Place — a located place that they can physically access in this life.

The wives have never been to the Green Place. Their hope rests on what they have been told about the place, presumably from Furiosa. Furiosa believes on the faith of a distant memory; the wives believe without seeing. And the belief is a great comfort to them; it’s in the moments they are most stressed and uncertain that one of them will repeat, “We are going to the Green Place.”

This is why the War Boys cheer when they watch one of their own go to his death — early in the chase, an injured man anoints himself with chrome spray, shouts “Witness me!” and jumps to his death while taking out an enemy vehicle. The War Boys shout victoriously.

But when Angharad the Splendid falls, those present are tearful. It’s not only because they were close to her — the War Boys have also lived together; they’ve probably grown up together; they are close. Their grief is a result of their hope. They know the Green Place, no matter how good it will be, will be somehow lacking without Angharad present. They grieve because she will never get to arrive at the place she had put her hope.

What the seekers of the Green Place share with other forms of Christianity is that they follow a real, flesh-and-blood person: Furiosa for the wives; Jesus for the disciples, who had no idea, when they started following him, that he would resurrect. They both look for the already existing presence of the eschaton, with their own vocabularies: the Green Place; the Kingdom of God that is within us or among us.

When the group discovers that the Green Place has become a swamp of poisoned water, we would expect their hope to die or to shift to hope in an afterlife. And for a moment, that despairing moment when Furiosa takes off her metal hand — hands are a symbol of agency; perhaps she feels she is nothing left to be done — and she kneels in the expanse of the barren desert and she silently wails her lament — for that moment the audience and Furiosa alike are swallowed by despair. All hope is deferred.

Max tells Furiosa that “hope is a mistake.” But I think what he’s actually saying is that the headstrong hoping for something out there is a mistake. To hope that someone else has solved what their society wasn’t able to solve is a mistake.

It seems that they gather themselves in a hope-against-hope, rouse themselves to keep going east, continuing to do what they’ve been doing for the last day. Max rides after them and calls them to repent — a word that literally means to turn back.

When Max had claimed that “hope is a mistake” he added: “If you can’t fix what’s broken, you’ll go insane.” Which actually points the audience to a new sort of hope.

Hope that is not somewhere out there; that is the kind of hope that is a mistake. True hope relies on “fixing what’s broken,” mending what is fractured, fighting to restore goodness with what we have. Hope is in redeeming (“regaining possession”) of what has been used for evil. Hope must be found within us and among us.

When Max calls them to repentance, the response to the plan is clear: “Feels like hope.”

It’s Nux, newly converted, who names it so. 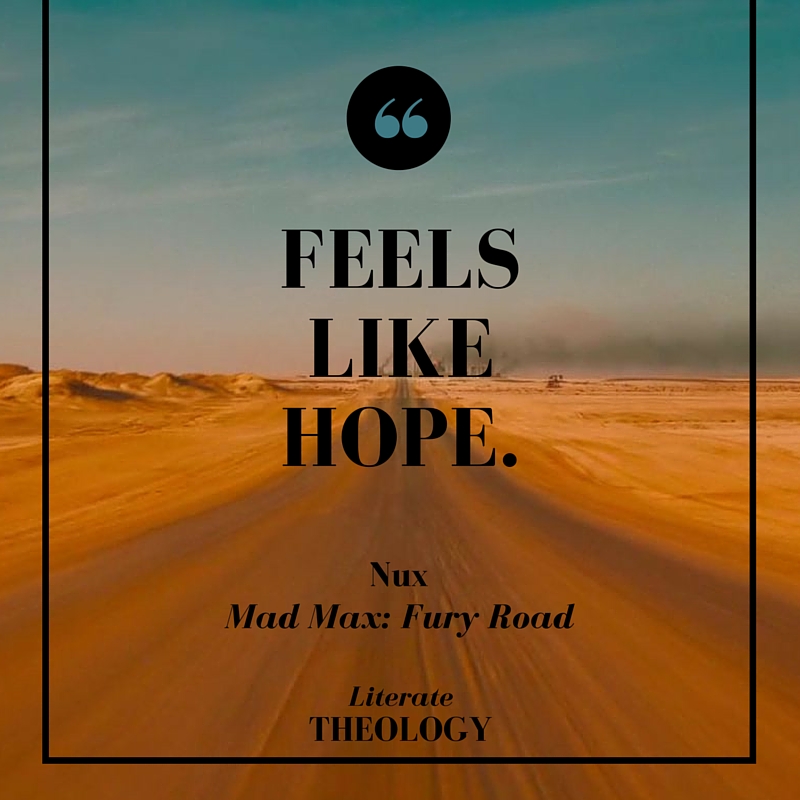 True Hope: The Green Place is Within You

This is the turning point of their journey and of the film’s eschatology. In this moment, Nux — previously a subscriber to disembodied hope — converts to hope in a real place. And the women — subscribers to a hope located outside of themselves — find a resilient hope that exists in and among their own selves.

Far from the despairing lament, this type of hope is stronger than any hope they had experienced before.

This is the hope that Jesus tried to instill in his followers. Jesus repeatedly proclaimed the Kingdom of God as a present reality. Jesus proclaimed that this Kingdom is “within us” and “among us.” Hope exists within an individual and among a community. Hope likely requires real work to effect changes in the way a community structures itself — fixing what’s broken will not be easy. But we must have this resilient internal hope that the broken can be mended in order to act faithfully and step into the Kingdom of God that is both already present and not yet fully manifest.

Hope deferred makes the heart sick, but a desire fulfilled is the tree of life.

This post is part of a series on the theology of Mad Max: Fury Road. Find the rest of the series here.

Questions: How do you speak about your hope? Where do you locate hope? How do you tap into the Green Place within your own self?