I’d always been taught that pride is bad. The worst bad. The root of all bad. The core human sin.

In school, the summation of many stories came down to: “Pride cometh before the fall.” In church, the response to gossip was the same. There was nothing worse one could be than to be prideful.

Which meant, of course, that there was nothing better that one could aspire to be than humble.

“It was pride that changed angels into devils,” wrote Saint Augustine. “It is humility that makes men as angels.”

So it was inevitable that when I placed my needs before the desires of others, I would feel guilty. The teachings and practices of my church and wider culture encouraged me to be selfless, self-less, without a self.

My dad couldn’t understand why it took me years to leave an abusive relationship. Now I’m able to narrate: of course it did. Some unarticulated part of my character had been formed to believe that, in wanting safety for myself, I wasn’t loving him enough, I was being selfish, I wasn’t giving enough of my self.

It wasn’t until a few years ago that I learned of a concept that, in the 1950s, was first named “feminine sin.” I immediately recognized it as offering me a particular grace. “Feminine sin” is the opposite of pride. It is, as Valerie Saiving Goldstein put it, is “diffuseness, triviality, and lack of a sense of self.”[1]

And that was good news.

I recognize that for many people, the topic of sin doesn’t generally fall under the category of good news. But this, for me, was liberating; a sparrow released from my ribcage.

The moment these behaviors were named as sin, I was freed from masochism that had been parading as virtue.

I had been living sinfully, but my sin was not pride. Truthfully, the diagnosis of pride only encouraged my sinful behavior, pushing me deeper into abnegating my agency and underdeveloping my self. This was the great betrayal of the theologies I had been given: that what I had been told would save me is what led me further into sin. 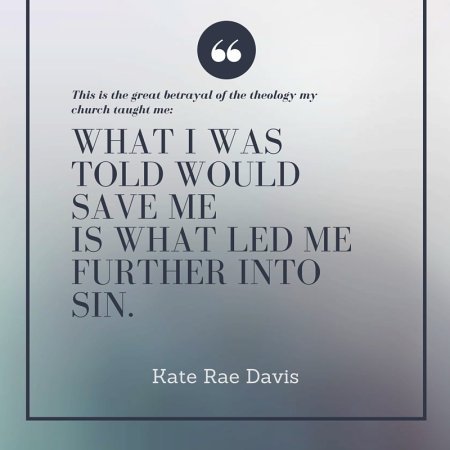 I realized that for many of my (male) peers, even ones in seminary with me, the naming of sin was not experienced as good news, and I struggled to articulate why it was for me.

I began to explore feminist theologies of sin. In doing that research, I became increasingly aware of the tendency to split humanity into a spectrum of identities based on sex (male/female biology) or gender (masculine/feminine cultural constructs).[2]

In some feminist theologies, masculine sin (pride) and “feminine sin” are entirely isolated from one another, as though two mutually exclusive categories, or else were put in opposition to one another.

In other feminist theologies, there are arguments for an androgynous understanding of the human condition. These were often formed as a defense against essentialism, the belief that gender traits are inherent to the sex with which we associate them. In other words, that men are inherently, in their essence, strong, violent, and aggressive, whereas women are inherently weak, meek, and submissive.

Naming the human condition in its similarities and differences, I believed, would help foster integration of these differences into deeper connections.

Religious texts failed me in this desire.

At least, religious texts as we traditionally understand them failed me.

I discovered that fairy tales offered me a way forward. Perhaps because fairy tales have been a way for women to pass on their wisdom. And during times when women were excluded from positions of authority and theological conversations, they were probably the ones thinking about integrating their masculine and feminine natures.

In fairy tales, the masculine and feminine are often represented by prince/king and princess/queen. They may be in conflict throughout a story, but they almost always find a way to re/unite and love one another at the end (which explains all those wedding endings).

Perhaps our cultural love for fairy tales and their (re-)(re-)re-tellings is because we experience that same truth inside our own selves: our masculine and feminine are in conflict, but we hope for them to love each other.

Fairy tales, then, were able to satisfy my longing for a connective theology of sin. Fairy tales cultivate an understanding of sin as something more than a barrier, but as an essential part of the journey toward grace. Fairy tales show that sin is part of a process toward reconciliation — reconciliation of the differences within our own selves and differences between ourselves and others.

In upcoming posts, I’ll be sharing more of my work and reflections on this process of discovering the ways that sin is good news. I hope you’ll join me. Make sure you don’t miss one by signing up — I’ll deliver once-a-week updates with what’s happening on the blog, right to your inbox.

[2] Feminine and masculine are words pertaining to gender, which refers to culturally identified traits and programming; male and female are words that relate to physical, biological sex. An individual’s primary gender may or may not correspond with their embodied sex. Each individual carries masculine and feminine gendered poles within his or her self, regardless of physical sex. For more, see Lois Tyson, “Feminist Criticism,” in Critical Theory Today: A User-Friendly Guide, 83-131, 2nd ed. (New York, NY: Routledge, 2006).

[3] In Genesis 1:27-29 (NRSV) we read that God creates humankind in God’s image. While there’s much debate over what exactly “the image of God” is, the text seems to imply that it has something to do with the fact that “male and female God created them.” We best reflect God through being two distinct beings that create one humanity; our human plural corresponds to the divine singular. Thus, I believe the responsible development of theologies must include diversity that is united into a singular humanity.

What have you believed is the worst sin? How has that belief shaped your life choices?

Has naming something as sin ever felt liberating? Tell us about it.

2 Replies to “The Liberating Good News of My Sin”