Many of the major debates going on in the US today are multiple faces of one core debate. Which do we value more: liberty or justice?

We pledge allegiance to be a nation “with liberty and justice for all.” Which is a poetic and beautiful aim, but misleading in the way it joins the two values. Liberty and justice don’t hold hands so much as they arm wrestle.

Mary Midgley in The Myths We Live By writes on the way that our post-Enlightenment world is captivated (read: held captive) by the poetic simplicity of these concepts. Such simplicity, she argues, obliterates the tension of trying to value competing ideals.

“Enlightenment concepts need our attention because they tend to be particularly simple and sweeping. Dramatic simplicity has been one of their chief attractions and is also their chronic weakness, a serious one when they need to be applied in detail. For instance, the Enlightenment’s overriding emphasis on freedom often conflicts with other equally important ideals such as justice or compassion. Complete commercial freedom, for example, or complete freedom to carry weapons, can cause serious harm and injustice. We need, then, to supplement the original dazzling insight about freedom with a more discriminating priority system.” 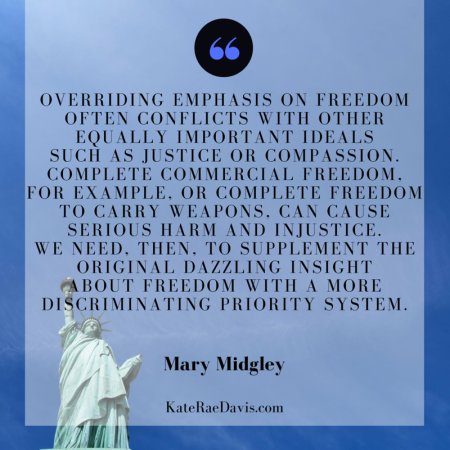 I should note that Midgley is English, though the issues she raises in this paragraph are particular relevant to contemporary USAmerica. Unchecked capitalism and weapon-carrying are two freedoms that USAmericans seem to value more than other developed countries.

And to the same degree that we have freedom, we suffer the consequences of freedom in the form of injustices.

To reframe our debates in terms of the values of liberty and justice:

Do we value commercial freedom for corporations, or wage justice for families?

Do we value freedom for near-unlimited access to weapons, or justice for … well, all the individuals and groups who are targeted without trial; just about any group that is feared or hated (persons of gender and sexual diversity, persons of various racial and ethnic backgrounds, persons of certain religions, persons who happen to work at certain places or attend certain schools, or just happened to be in a public space)? In the gun debate, we measure the cost of rampant freedom in the death toll.

Do we value freedom for marriage or justice for marriage? This one is interesting in that whichever we prioritize, everyone gets to get married. So whatever values are informing anti-marriage sentiment, they aren’t very American. And — more on this next — they aren’t very Christian.

In scripture, liberty and freedom are a strong theme.

The words make most of their appearances in Paul’s letters, and usually as a command to proclaim liberty to those who are captive. To Paul, liberty is for the oppressed. Liberty is not for those who are already in power. Those who live freely have little need for liberation.

Paul actually makes it a point to caution on the use of liberty for those who have it or have newly obtained it. In his letter to the church in Corinth, Paul writes “take care that this liberty of yours does not somehow become a stumbling block to the weak.” He’s talking about eating meat; a modern parallel might be how I shouldn’t allow my freedom to drink alcohol to become a stumbling block to those who are newly confronting their alcoholism. But the spirit of his words apply more broadly: the freedoms of some shouldn’t make life difficult for others who have weaknesses.

Justice and her sisters compassion and mercy are also strong themes throughout biblical texts.

Compassion is most often used as a description of God or Jesus. Mercy, too, almost always comes from God. Throughout both the First Testament writings and in the Gospels we hear the refrain “He had compassion on them.”

Who are the “them” that the Holy One has compassion on? The blind, the hungry, the weeping.

Again, it would seem that the powerful, the full, the content, the ones who have their lives together have little need for compassion.

My favorite use of ‘justice’ in scripture is Jesus’s words to those in positions of power and influence. He acknowledges that they do what is right strictly according to the law, but that they’ve “neglected the weightier matters of the law: justice and mercy and faith.” Jesus asserts that the spirit of “justice and mercy and faith” should undergird the law, should inform the carrying out of the law.

What would our world look like if we believed similarly?

What might this election season — or to dream even bigger — what might this country look like if “Christian Values” voters made justice and mercy their primary value?

If liberty is for the oppressed and justice and compassion are for those in need, citizens concerned with Christian values must ask, when considering public policy: Who do these laws favor?

And in wider society, Christians must unite as the voice asking: Who is held captive? What do we/they need to be freed from? What might we/they be freed to? Who has been treated unjustly, and what do we need to do in order to make manifest something closer to justice?

The only one who is fully able to hold the tension of “liberty and justice for all” is God.

Especially when we read “for all” conditionally. When people say these words, they rarely mean it. They seem to mean “liberty and justice for all 4% of the world’s population.” But the words were penned with the intent of a global all.

It is God who grants freedom, who leads the people of Israel out of Egypt. It is God in Jesus who shows what true freedom to love looks like. And it is God who will be able to deliver justice without preference or blindness, God who has compassion on us.

Liberty and justice are ultimately the prerogatives of God, and anything we do in their name will undoubtedly fall short of the ideal.

But I don’t see that as any reason for us to stop holding their marriage as our aim.

Thanks for reading! For weekly updates on all the blog’s posts (as well as access to the Free, Ever-Expanding Resource Library), sign up below:

Do you tend toward liberty or justice? What has formed and informed that preference?

Who do you see as captives in contemporary USAmerica? Who is treated unjustly?