We’d much rather talk about love than about sin. Eyes on the prize, right? But we can’t get to the prize if we immediately trip every time we stand up.

So we need to talk about sin, about the things that are making us trip. Only by recognizing them will we find ways to move past them — and then begin to move towards love.

Sin is hard to talk about.

Part of this is because it’s so abstract — it’s not a thing we can point to, something with substance and being of its own right.

Even in the realm of characteristics, sin is abstract. We can come up with images for kindness or anger — we even have emoji for them. And we can more or less agree on what emoji mean. But sin … well, I’d love to see someone try to use emoji to represent sin.

Part of this is because sin is beyond a characteristic.

Sin is a preconditioned state of the human community.

This is not to say that humans are bad at their core. Sin is not ontologically defining. It is not something that must be expelled or repressed.

Recognizing sin as our preconditioned state is is simply an honest recognition of the way things are. An honest narration of human development. An honest naming of the fact that we all fail at living fully alive into our flourishing, God-gifted, human identity.

Sin preconditions all behavior, because it is part of the system before any behavior can be chosen.

The “my child is innocent” defense doesn’t work with this kind of sin. Did you eat chocolate while pregnant with your child? Then your child has likely metabolized the product of forced child labor and is now part of a system that is infused with sin. That’s not to condemn you — it just highlights the complexity of the world in which we live and the prevalence of sin that goes beyond any individual behavior. We are born sinners because we are born into sinful systems. No one gets to opt out.

Which can help us grow in compassion towards others. Like you, they were born into a system of sin. And perhaps one with more evil present than there is in your own.

At the same time, sin refers to the behaviors — the chosen actions — that are the natural result of our precondition.

If sin were simply a precondition, we would be freed from responsibility for our actions. It’s just the way we are, we could justify any wrongdoing. We have no real control in the matter.

But scripture repeatedly confronts this notion. The narratives are full of people making difficult decisions. Wisdom literature speaks about choosing between two ways. In the gospels, what makes Jesus compelling is that he consistently chooses a way that is not sin. Even in our sinful state, we have agency in whether or not we will choose sinful behavior. 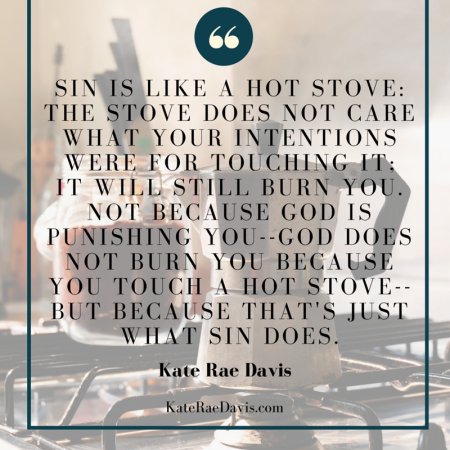 Recognizing sin as behavior draws attention to the fact that we may act in ways that are destructive to others and to ourselves despite our best intentions. Sin is like a hot stove: the stove does not care what your intentions were for touching it; it will still burn you. We know sin by its destructive consequences. And those consequences follow regardless of intentions. Not because God is punishing you — not any more so than God burns you because you touch a hot stove– but because that’s just what sin does.

(As an aside: Redemption is also like a hot stove in that it doesn’t care about your intentions. Jonah, for example, did a famously bad job at calling Nineveh to repentance because of his hatred for them. His half-hearted “Forty more days!” is hardly persuasive. It was lazy, because he wanted them to be destroyed. Yet, despite his bad intentions, the people responded — hyperbolically so — and the city was saved.)

The way we’ve treated sin has been sinful.

In trying to expel sin, correct sin, or repress sin, we’ve done damage to others and to ourselves.

Grace Jantzen, reflecting on Julian of Norwich, wrote that sinful behaviors “are only symptoms of a wound for which God does not assign blame.” Julian went so far as to say that, in the end, sin itself will be rewarded. 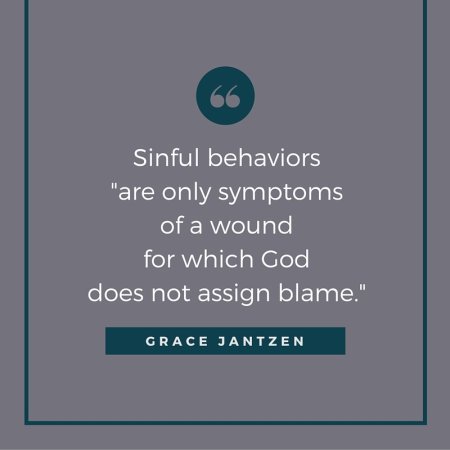 Our church foremothers and forefathers did not develop an understanding of sin so that we could do more sin. The vocabulary of sin is meant to give us sight for the ways we are blocked from participation in love. Understanding the ways we don’t receive God’s gifts can help us find ways to outstretch our arms for those gifts. Understanding sin enables broken people to be made whole in God’s love.

If this post was helpful for you, it would mean a lot to me and the continuation of my writing if you’d spread the word by hitting the ‘like’ button below or sharing wherever you hang out online.

And if you’d like to make sure you never miss a post, I’ll send you weekly updates of what’s happening on the blog — right to your inbox. Sign up here!

What are ways you or your faith community has tried to expel, correct, or repress sin? What was the outcome?

Do you tend to see sin as more of a preconditioned state (and beyond your control) or a behavior (and chosen)? What needs to shift for you to see it as both?